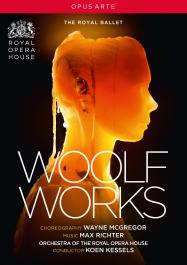 ​Virginia Woolf defied the false order of narrative conventions to depict a heightened, startling and poignant reality. Woolf Works recreates the synaesthetic collision of form and substance in her writings. Each of the three acts springs from one of Woolf's landmark novels: Mrs Dalloway, Orlando and The Waves but these inspirations are also enmeshed with elements from her letters, essays and diaries. Woolf Works expresses the heart of an artistic life driven to discover a freer, uniquely modern realism, and brings to life Woolf's world of 'granite and rainbow', where human beings are at once both physical body and uncontained essence. Woolf Works (2015) was Wayne McGregor's first full-length work for The Royal Ballet.

Orchestra of The Royal Opera House

"At its creation in 2015, Woolf Works felt like a breakthrough for choreographer Wayne McGregor, adding a new emotional weight to his athletic force and fascination with technology. In this first revival, it’s even stronger, with Alessandra Ferri luminous as the Virginia Woolf figure… It’s a thoughtful, heartfelt performance in a ballet that is both intelligent and tender." (The Independent ★★★★)

"Since its premiere in 2015, Wayne McGregor’s first full-length ballet has won the 2015 Critics’ Circle award for best classical choreography and the 2016 Olivier Award for best new dance production, while its star, the fiftysomething ballerina Alessandra Ferri, has won an Olivier for outstanding achievement in dance. No wonder the Royal Ballet decided to revive Woolf Works as part of the celebrations marking McGregor’s tenth anniversary as resident choreographer." (The Times ★★★★)

An introduction; Maggie Smith reading extracts from The Waves; On the music.