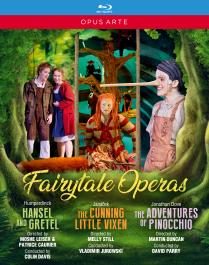 Fantastic storylines abound in opera, but these grand musical settings of much-loved fairytales embrace the imaginary, giving free rein to dreams. The Royal Operas acclaimed Hansel and Gretel combines the directors characteristic wit and knack for dark comedy with the story's enduring charm. Glyndebourne's recounting of the quick-witted fox's escape into nature balances the opera's whimsy and mysticism. Opera North's enchanting staging of Jonathan Dove's 21st opera is a wittily inventive feast for the eyes and ears, shining new light on Collodi's original tale, by turns magical and dark.

The Orchestra of The Royal Opera House

Orchestra and Chorus of Opera North

"What an inspired and exciting opera this is. Gorgeous characters, a busy story rich in incident and an exhilarating mix of music. Delight follows delight." (The Stage - The Adventures of Pinocchio)

"Not only was the production a great one to attend as a first opera, but the DVD is perhaps as good an introduction to opera as one could hope for, a success on almost every front." (Musicweb International - Hansel und Gretel)