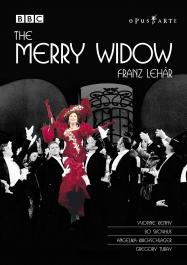 "It would be hard to imagine a more extravagant production of The Merry Widow than Lofti Mansouri's for the San Francisco Opera, recorded live on this DVD in December 2001...Yvonne Kenny as the heroine not only sings beautifully but is both vivacious and provocative. Bo Skovhus makes a handsome Danilo, determined not to be putty in her hands, and their final reconciliation to the Merry Widow Waltz could not be more moving." (The Penguin Guide)

"Rarely does the opera stage fill the small screen so lavishly." (Philadelphia Enquirer)

"Michael Yeargans glamorous and beautifully-wrought designs and Thierry Bosquets extravagant costumes. We see all too little of this kind of splendour in these cash-strapped days." (Opera)

"Recorded live in San Fransisco in December 2001, this is about as lavish a production of Franz Lehárs adorable operetta as you are ever likely to see...soprano Yvonne Kenny is perfectly cast in the title role." (Classic FM)