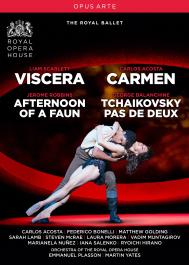 Carlos Acosta focuses on the dramatic essentials of love, jealousy and revenge in his new production of Carmen. As well as choreographing the production, Acosta dances a lead role.

Liam Scarlett has used Lowell Liebermann’s thrilling Piano Concerto No.1 as the inspiration for his similarly audacious choreography in Viscera.

Debussy’s evocative score is the inspiration for Jerome Robbins’s Afternoon of a Faun, which depicts two ballet dancers as absorbed by their own reflections as they are attracted to each other.

George Balanchine’s Tchaikovsky pas de deux uses a fragment of music composed for the 1877 production of Swan Lake for an eight minute display of ballet bravura and technique.

AFTERNOON OF A FAUN

"So this Carmen isn't about thrusting Acosta into the spotlight for his standing ovations, it's more of a creative progression. It's a short but ambitious work, with Bizet's score condensed to an hour and the story stripped back to a concise love triangle... Their duets are inventive – one sees the captive Carmen wrap Don José in her own prison chains... Jerome Robbins' Afternoon of a Faun, with Vadim Muntagirov and Sarah Lamb capturing the piece's particular seductive yet sexless atmosphere; and Steven McRae and guest Iana Salenko proving their mettle in the showpiece Tchaikovsky Pas De Deux. Plus Liam Scarlett's lovely Viscera, a fleet and perky neo-classical ballet with an elegantly restrained central pas de deux and a great performance from Laura Morera, panache and personality in every step." (The Evening Standard)

"Carlos Acosta belongs to that rare breed of dancers who’ve crossed the line from ballet star to household name. He’s famous not only for his buoyant, big-hearted technique, but because his personality has captured imaginations. The boy from the Havana slum who battled his way to international stardom, the artist who remained loyal to his Cuban background in the dancers he supported... Despite his intention to strip the story down to its essentials, Acosta has thrown everything into this 60-minute ballet. He has flamenco players and opera singers performing a souped-up Bizet score; a chorus of barflies who swoop around the space on wheeled chairs; a horned and musclebound figure of Fate who looms in front of a blood-red sun, and jazz, contemporary and Latin dance thrown into the choreographic mix... Acosta also knows how to elicit fine performances from his cast, with Marianela Nuñez an exceptionally natural Carmen, Federico Bonelli cast joyously against type as the narcissist Escamillo and Acosta himself as a self-immolating Don José..." (The Guardian)

"Vadim Muntagirov and Sarah Lamb give a skilled if (in her case) glassy rendition of Jerome Robbins’s jewel-like paean to the dancer’s psyche, Afternoon of a Faun (1953), while Iana Salenko pulls off the considerable feat of nudging Steven McRae into second place in Balanchine’s 1960 showpiece Tchaikovsky pas de deux – an absolute star turn from her, with the most exquisite below-the-knee movement of the entire evening. Most rewarding of all, however, is the revival of Liam Scarlett’s 2012 abstract work, Viscera. Created for Miami City Ballet, this is Balanchinian in flavour (the geometry, the plain cyclorama and costumes, Lowell Liebermann’s son-of Stravinsky piano music) but Ashtonian in the detailed use of upper-body and the constantly protean direction of movement, and it reminds one just what a strong abstract choreographer Scarlett is. This is dance that makes dancers look good, and the 16-strong ensemble – Laura Morera and Leticia Stock above all – reward it with performances of exhilarating attack." (The Daily Telegraph)