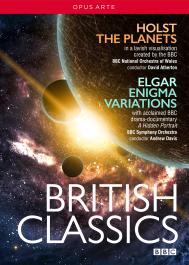 ​This box set combines two much loved British classics: Elgar's seminal 'EnigmaVariations' and Holst's orchestral masterpiece 'The Planets'. In an acclaimed BBCdrama-documentary filmed in the rolling Malvern Hills, Sir Andrew Davis unravelsthe mystery of the famous musical puzzle contained in Elgar's work followed by alandmark performance of the complete score by the BBC Symphony Orchestraconducted by Sir Andrew Davis given in the cathedral in Elgar's home town ofWorcester.

The lavish visualisation of Gustav Holst's orchestral masterpiece 'The Planets' and Colin Matthews' additional movement 'Pluto', the Renewer features spectacular images which enhance the symbolic meaning attributed to each planet by the composer. Directed by Rhodri Huw, this memorable audiovisual experience blends images filmed in many locations around the world, computer graphics, animatronics and a splendidly atmospheric performance by the BBC National Orchestra of Wales.

"Sir Andrew Davis's fine performance of the Enigma Variations, with Nimrod hushed, slow and steady, was recorded in the atmospheric surroundings of Worcester Cathedral, where Elgar said everyone should hear his music. Davis introduces a highly enjoyable documentary about the work and 'the friends pictured within'. In the documentary he suggests that each variation, as well as reflecting the character of a particular friend, reveals much about Elgar himself, 'like an actor playing many roles'." (The Penguin Guide - Elgar)

"Andrew Davis presents the documentary in an engaging style, giving an overview of the variations, as well as homing in on several of them. …there's a lot of information presented in an unassuming way, and, for anyone coming to this masterpiece for the first time, it's a good way." (BBC Music Magazine - Elgar ★★★)

"With the BBC NOW musicians playing as if these were their own lives on the line, the passion and commitment was total... it could hardly have been more alive and compelling." (The Guardian - Holst)

"As for the performance, this is not a run-of-the-mill Planets. Atherton recreates the score with both subtlety and aplomb, and with the necessary bravura when called for. It is difficult sometimes to pay too careful attention to the music given the sheer overwhelming beauty of the visual images, but the underpinning is very present, and one comes to a whole new appreciation of Holst’s masterpiece by having a visual element." (Musicweb International - Holst)