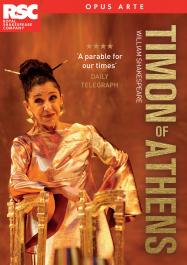 ‘A parable for our times’ Daily Telegraph

In a world driven by greed, what do we truly value?

Timon has it all – money, influence, friends. Surely it can’t last?

When the money runs out, Timon soon finds her influence and friends have also gone. Left alone, she flees Athens to take refuge in the woods, cursing the city she once loved.

Simon Godwin directs Kathryn Hunter as Timon in this dark satire, which forces us to question where does happiness really lie?

‘A searing central performance’ The Guardian

"Simon Godwin has taken exactly the right approach to this new production of one of the Bard's most obscure, least performed plays. With a swashbuckling candour and refreshing energy, he's filleted and reformed the piece as a brisk, no-nonsense crash course in straightforward storytelling... the production is a handsome and judicious representation of this rarely done play, which should do much to rehabilitate it in the canon" (WhatsOn Stage)

"Kathryn Hunter is hypnotic in this gender-switched tragedy" (The Telegraph ★★★★)

"Kathryn Hunter stars in a strong production of Shakespeare’s bleak, underrated drama at the Swan Theatre" (The Financial Times)