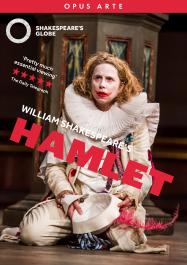 Encompassing political intrigue and sexual obsession, philosophical reflection and violent action, tragic depth and wild humour, Hamlet is a colossus in the story of the English language and the fullest expression of Shakespeare’s genius.

Learning of their father’s death, Hamlet comes home to find their uncle married to their mother and installed on the Danish throne. At night, the ghost of the old king demands that Hamlet avenge their ‘foul and most unnatural murder.’

"Terry is the fourth female Hamlet I have seen and she brings to the role all the qualities one might expect. She speaks the verse intelligently, initially conveys a sense of bereft solitude – her voice cracks on the implication that she “seems” to be affecting grief – and is very good at suggesting bottled rage. " (The Guardian)

"Hamlet is played (very finely, actually) by a woman (Terry), Ophelia by a bloke (Shubham Saraf); she/he, raging and reeling about the stage, tells the restrained and demure him/her to “get thee to a nunnery”, shouting in his face." (The Daily Telegraph)

"Terry is fiercely intelligent and wonderfully funny and has a great wealth of experience at playing Shakespeare – at the Globe and elsewhere (she portrayed Henry V in Regent's Park). She intuitively understands how to release the stellar power of the language. " (The Independent ★★★★)

"The prospect of Michelle Terry playing Hamlet is immensely exciting. She has shown herself to be a Shakespearean actor of great delicacy and intelligence in numerous roles ... It’s a production that places clarity of verse and emotion over directorial fireworks." (The Stage)