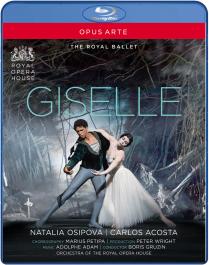 Giselle remains one of the most popular Romantic ballets of all time. The story brings together an engaging mix of human passions, supernatural forces, and the transcendent power of self-sacrificing love. The production by Sir Peter Wright catches the atmosphere of this great Romantic ballet, especially in the perfection of its White Act, with ghostly maidens drifting through the forest in spectacular patterns – one of the most famous of any scenes for the corps de ballet. Giselle dances with lightness and fragility, giving the impression of floating through the mist.
This is one of The Royal Ballet’s most loved and admired productions, faithful to the spirit of the 1841 original yet always fresh at eachrevival. This performance features former Bolshoi star and now Royal Ballet principal Natalia Osipova in a breath-taking interpretation of thetitle role.

"Natalia Osipova, making her debut with the Royal, is, yet again, a revelation. Through the quality of her dancing and dramatic imagination she manages to hold two conflicting forces in play, Giselle as a drama of the gothic supernatural and Giselle as a human love story. Right from the start, Osipova establishes her character as doomed, a young woman barely tethered to a life of ordinary happiness. Alone with Albrecht she's half-frozen, afraid of being overwhelmed by love; and even when she's able to release her feelings in dance, the speed and buoyancy of her execution read less as the technical marvels they are than as a rush of artless fevered emotion. [...] Pulling against the choreography's thistledown prettiness, Osipova's dancing veers towards the ugly and the macabre, her jumps spookily levitating, her body locked into a jerky trance. Simultaneously, we're shown glimpses of Giselle's mortal self, battling her translation into spirit form as she tries to save Albrecht from the vengeful Wilis. The latter – danced by the Royal's corps with a disciplined, baleful beauty – ramp up the tension to genuinely frightening effect. The ending is as tragic as any Giselle I've seen." (The Guardian ★★★★★)

"A Giselle even better than anticipated, which – given [Natalia Osipova’s] performance in the same role with the Mikhailovsky ballet last year – was no mean feat. Put simply, the Royal Ballet’s dancers appear to have encouraged her to raise her game still further – and the effect has been mutual. Heroically partnered by Carlos Acosta as the duplicitous-then-remorseful Count Albrecht, Osipova in Act I floats on air and spins in reckless ecstasy, in an interpretation both technically and artistically supreme. From the start, her pretty peasant girl is a little too tightly coiled for comfort: should she really be quite so energised and overwhelmed by Albrecht, quite so clingy in their fleeting farewells? These character details generate a mesmerising tension and make perfect sense of Giselle’s pivotal “mad scene” – her collapse doesn’t come from a clear blue sky. And here, Osipova finds a yet higher gear. Her ballon and elevation are unique: she appears virtually to be able to will herself into mid-air, to hang there unsupported. I have never seen a Giselle either so ethereal or, as the act progresses, so eloquently imploring or forgiving, every supernaturally weightless hop and flicker of those long arms magically moulded into an expression of love. By the time Osipova's Giselle makes her desperately moving departure – retreating into the morning mist with such delicacy that she genuinely seems to dissolve into it – you know you have been in the presence of greatness. [...] Peter Wright and John Macfarlane’s production is the most beautiful there is, and this was truly a night to remember." (The Telegraph ★★★★★)

"Natalia Osipova’s Giselle is the most radical I’ve ever seen. Not because she takes any liberties with this Romantic classic – she dances with pure line, superb technique and feeling for the ballet’s style – but because her dramatic intelligence brings it to such fresh, burning life. The Royal Ballet looks energised by its new star, with a strong company performance around her. Acosta partners her with devoted care, and responds to her dazzling dancing with renewed sharpness and attack of his own. Led by Valentino Zucchetti and Yuhui Choe, the peasant pas de six has an airy precision." (The Independent ★★★★★)

"There have been thousands of performances of Giselle since its debut in 1841. You’d think there’d be nothing left to say about it but then along comes Natalia Osipova. The Russian 27-year-old is the Royal Ballet’s latest big signing, a former Bolshoi starlet who controversially jumped ship to the lesser-known Mikhailovsky Ballet and has now landed full-time in London. As a dancer, Osipova is wise beyond her years, an intensely serious artist as well as a superlative technician. Giselle is the ideal role for her — the peasant girl who comes back to haunt the man who betrays her is a complicated, otherworldly heroine." (The Evening Standard ★★★★★)