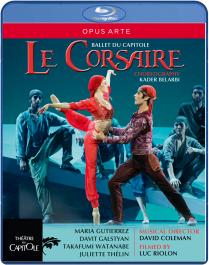 Hailed by Le Figaro as ‘simply magnificent: a miracle in two acts’, Kader Belarbi’s new production of Le Corsaire is a bold reinvention of a 19th-century classic. Belarbi’s fresh scenario and choreography give this colourful yet ultimately tragic story of the corsair (Davit Galstyan) and the beautiful slave-girl who captures his heart (Maria Gutierrez) renewed clarity and simplicity. David Coleman conducts a score based on Adolphe Adam’s original work, but enhanced with music by composers from Massenet to Sibelius, as well as new compositions and orchestrations by Coleman himself. The score is the result of close collaboration between Belarbi and Coleman, and its strong and coherent musical framework brings Belarbi’s staging to life. This is a version of Le Corsaire for the modern age, giving the work – in Belarbi’s words – ‘resonance and meaning today’.

"he Ballet du Capitole’s new production of Le Corsaire represents dance making at a very high level. There is an artistic collaboration at work here that has paid huge dividends, choreographically, musically and scenically. David Coleman has done an admirable job of re-orchestrating what, in the wrong hands, could have been something of a hotch-potch, given that themes from Adolphe Adam’s original score are intercut with additions by Massenet, Arenski and Sibelius. Belarbi has succeeded in capturing the essence of a nineteenth century ballet and in breathing new life into it ... The production is a marvelous distillation of expert collaborative ideas." (Auditorium)

"... for anyone whose main priority is to have a "Le Corsaire for the modern age” – and anyone wanting to watch expertly and beautifully filmed performances by a very accomplished company of dancers - this innovative account from Toulouse could hardly be bettered." (Musicweb International)