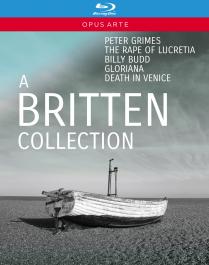 Outstanding singers, conductors and directors come together in five diverse but compelling operas by Benjamin Britten. The turbulent, inward fishing community of Peter Grimes is transposed to a merciless 1980s society in Richard Jones’ production, where mutual distrust and dislike have appalling consequences. An ‘outstanding’ Sarah Connolly (Guardian) stars in The Rape of Lucretia, navigating the difficult tale with superb poise and supported by acclaimed baritone Christopher Maltman in the role of Prince Tarquinius. Billy Budd is grippingly staged aboard the claustrophobic HMS Indomitable, with Jacques Imbrailo portraying the troubled sailor and John Mark Ainsley as the tormented Captain Vere in the 2010 Glyndebourne Festival Opera production by Michael Grandage. More light-hearted is the Royal Opera House staging of Gloriana, penned by Britten to celebrate the Coronation of Queen Elizabeth II. Focusing on the first Queen Elizabeth’s stormy relationship with the Earl of Essex, the production features Susan Bullock as the monarch and Toby Spence as the hot-headed and ultimately treacherous Essex. Finally, Edward Gardner conducts the English National Opera in Deborah Warner’s highly acclaimed production of Death in Venice. John Graham-Hall stars as the ageing Gustav von Aschenbach, whose attraction for a beautiful young Polish boy has fatal consequences. These productions from some of the world’s best opera houses offer five masterful performances that are an ideal way to experience the music of Benjamin Britten.

"Elder's unerring sense of theatre puts him absolutely at one with the stage in every episode. He's clearly the guiding spirit of this Billy Budd. The production has been directed with laudable unobtrusiveness by Michael Grandage...Video director Francois Rousillon does exceptional work here, with the precision of HD a constant pleasure. Opus Arte's recorded sound is superb." (International Record Review - Billy Budd)

"... the pride and joy of Richard Jones's production, not to be missed, is its unerring grasp of the psychology and tiered relationship of all the characters. ... Ticciati eschews the weighty, rather Germanic approach of older conductors ... concentrating (like Goodall or Hickox) on rhythmic and instrumental subtleties." (Gramophone - Peter Grimes)

"The pleasure of the piece lies in the music’s unexpected flashes of beauty, in its ironical foreshadowings of A Midsummer Night’s Dream, and above all in the community masque which Lucy Burge’s choreography and Ultz’s visual wit make both comic and touching. And what performances we get: Susan Bullock is an awe-inspiring Gloriana - imperious, perverse, tormented – while Toby Spence, as Essex, has regained all his pristine vocal lustre. Mark Stone’s Mountjoy, Clive Bayley’s Raleigh, and Andrew Tortise’s Spirit of the Masque are each outstanding. Covent Garden has now shown that Gloriana is, if not a great work, certainly one of the most intriguing in the canon." (The Independent - Gloriana)

" ... the cast is so superb and Paul Daniel's conducting so sure-footed. Every element in Britten's score needs to glow with beauty. The 13 ENO instrumentalists deliver gloriously. Christopher Maltman's ferocious, magnetic Tarquinius distils all the charisma and youthful sexuality that the music describes. Sarah Connolly's Lucretia is powerful and robust yet strangely sexless, almost boyish. The opera is a feast of musical moments. The simplicity and directness of McVicar's staging ensures that every detail in text and vocal lines gets attention, and McVicar uses the Coliseum's wide stage space brilliantly." (The Evening Standard - Rape of Lucretia)

"Everything else about the performance - Edward Gardner’s crystalline orchestra, Andrew Shore in multiple guises, Tim Mead, Marcus Farnsworth, Anna Dennis, Peter van Hulle and the chorus on the periphery - is pitch-perfect in economy and clarity." (The Daily Telegraph - Death in Venice)