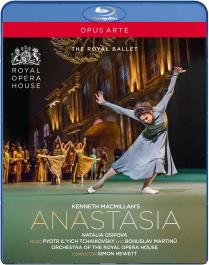 Many believed her to be an imposter; others hoped she was Anastasia, a remnant of a lost world. A powerful, psychological challenge for the lead dancer, Anastasia explores one of the great historical mysteries of the 20th century, only recently solved, and the distorting mirror of memory, time and place.

"A commanding performance from Natalia Osipova - The present revival of Kenneth MacMillan’s Anastasia brings back to the stage an adventurous, fascinating creation, its final act made in 1967 during MacMillan’s time as director of the Deutsche Oper ballet. Its subject is the derelict woman, known as Anna Anderson, discovered 40 years earlier in Berlin and unwisely supposed to be Anastasia, daughter of Tsar Nicholas II, somehow escaped from the cellar where the imperial family had been murdered by Bolshevik soldiery. Fascinated by this event, MacMillan produced an expressionist drama of haunting imagery and resonating force in which Anna journeys through a labyrinth of memories and suffering in quest of an identity.... Natalia Osipova’s Anna was truth itself in her sympathy and understanding, commanding in emotion as in execution... I salute Osipova, the entire company performance, Crowley’s magnificent designs, and Simon Hewett’s notable account of the Tchaikovsky/Martinů scores." (The Financial Times ★★★★★)

"Osipova moves with wrenching attack, her body seeming to fight itself as Anna tries to make sense of her world. Losing herself in the past, she dances again with her sisters. Their graceful steps give them a shared identity, even though her grey shift stands out against their delicate lace dresses. So many ballets focus on women’s love lives; MacMillan, and Osipova, show Anna fighting for her sense of self, beyond the question of fact or memory." (The Independent)" (The Guardian)