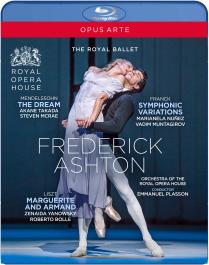 ​Three contrasting ballets by The Royal Ballet’s Founder ChoreographerFrederick Ashton: The Dream (1964) is an enchanting adaptation ofShakespeare’s A Midsummer Night’s Dream to music by Mendelssohn.Symphonic Variations (1946) is an early Ashton masterpiece, and a breathtaking, abstract work on the beauty of pure movement. Margueriteand Armand (1963), here danced by former Royal Ballet Principal ZenaidaYanowsky and Guest Artist Roberto Bolle, is a tragic love story of greatlyric beauty. The Orchestra of the Royal Opera House is conducted byEmmanuel Plasson.

Orchestra of the Royal Opera House

"First-rate dancing in an Ashton triple bill that offers comedy, serenity and demi-monde ardour" (The Stage ★★★★)

"Saying farewell to the Royal Ballet after 23 years, Yanowsky shows her quality as an actress, a dancer and a star. There’s a grand sweep to her movement, while her alert stage presence makes tiny moments count. When she’s forced to give up her lover, Roberto Bolle’s Armand, she holds still for a vulnerable second, trying to resist the inevitable. In her death scene, she’s ardent and feverish, clinging on to life. Bolle less at home in the grand gestures, but makes a sure, devoted partner. It’s a very moving goodbye." (The Independent ★★★★★)

"Nicely covering the many bases of Frederick Ashton's genius, the Royal Ballet triple bill which opened last night is a chance to see both the company and its founder choreographer on top form. The Dream shows Ashton at his narrative best, handling comedy and kisses with equal aplomb. Symphonic Variations displays his slightly less well-known talent for abstract ballet, and is one of the most enjoyable 20 minutes in the entire repertoire. And Marguerite and Armand commemorates his abiding fascination with Margot Fonteyn, who inspired him more than any other dancer except perhaps Pavlova. Akada sparkles with Ashtonian sexiness, all orgasmic flutters and quivers." (The Arts Desk ★★★★)

"A passionate tribute to an all-time genius. The Royal Ballet is bringing this season – and its 70th-birthday celebrations – to a close with a perfectly chosen trio of works by its founder choreographer Frederick Ashton (1904-1988), works that remind us just how brightly and variously his genius blazed." (The Daily Telegraph ★★★★)

"Choreographically and musically, Ashton’s ballets remain as lustrous as the day he made them, and the Royal continues to give a fine account of them. The triple bill was splendidly danced over the course of its nine-day run. Fairies flitted beguilingly in The Dream, Symphonic Variations wove its ineffable spell, a trio of sad-eyed Marguerites expired in their lovers’ arms. Of starry performances, there was no shortage." (The Guardian ★★★★)