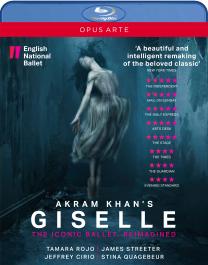 Giselle has become a former garment factory migrant worker. Albrecht, a member of the wealthy factory-owning class. An abandoned 'ghost factory' haunted my the memory of female migrant workers, many of them victims of industrial accidents, replaces the traditional glade of Act II. There, Giselle's desire to break the cycle of violence will lead her to reconciliation with Albrecht and his release from the retributive justice of the Wilis.

Composition and Sound Design - Vincenzo Lamagna, after the original score of Adolphe Adam

"Giselle has been transformed for the ENB by Akram Khan into the ballet event of the year. Staggeringly beautiful and utterly devastating, it is an electrifying triumph which any dance or theatre fan must not miss." (The Daily Express ★★★★★)

"'Demonic' is the only word for the ferocious energy and precision with which ENB’s dancers deliver Khan's extraordinary feat of re-imagination." (Arts Desk ★★★★★)

"A sensational and sensuous 21st century Giselle ... Akram Khan’s stunning re-imagining is destined to become a contemporary classic." (The Stage ★★★★★)

"An extraordinary, landmark production ... A remarkable production performed by some of the best dancers in the world. ... Akram Khan’s thrilling, virile choreography excites and marries both the contemporary with the classical." (Manchester Evening News ★★★★★)

"The whole ballet is magnificently danced and it is, I think, a gift for ENB." (The Guardian ★★★★)

"It’s the sensational group dances that resonate most... earthbound, visceral, feral and intense, and moulded with a sculptural beauty. ... Khan’s choreography has never looked better. Working with such finely tuned ballet dancers has given his movement more uplift. ... You may be struck by the emotional power and visual thrill of Khan’s new version of English National Ballet." (The Times ★★★★)

"Bravo to the entire company, which performs with impressive commitment ... The ballet is a beautiful and intelligent remaking of the beloved classic" (New York Times)

The Creative Process; The Characters of Akram Khan’s Giselle; Creating the Costumes for Giselle; Interviews with Dramaturg Ruth Little with Stina Quagebeur, James Streeter, and Madison Keesler, and with composer Vicenzo Lamagna