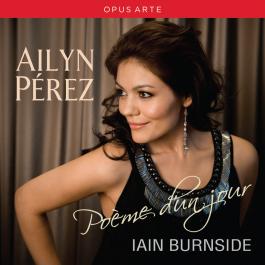 An intriguing mix of French and Spanish song explores the theme of love found, enjoyed and lost, from the dropped hints of Fauré to the fiery passion of Turina, Obradors and Falla. The urbane charm of Reynaldo Hahn and innocent fervour of Massenet’s Manon are equally captured by American soprano Ailyn Pérez, who has bewitched opera and recital audiences on both sides of the Atlantic.

Presenting the major singers of today and the stars of tomorrow, the Rosenblatt Recitals are London's only world-class season of opera recitals. This new partnership with Opus Arte will see 5-6 CDs released per year, based predominantly on studio recordings with occasional bonus live tracks.

"Pérez's Hahn and Fauré selections are subtly shaped, but the Massenet is on a different level of immediacy and character." (The Independent)

"Theres a hint of Victoria de los Angeles in the programming and the style of this lovely young American soprano...In the Seven Popular Spanish Songs, she rivals de los Angeles with her alternately seductive and anguished manner." (The Sunday Times)

"Every so often, a singer comes along who completelv bowls you over ... [a] delightful disc ... Perez is completelv at home in the Spanish songs in her recital, applving lush, chocolate tones to the material. The singer most frequently brought to mind...is Victoria de los Angeles, partly because of the programme but also the vocal qualities on display: the delicacy, lightness and timbre of her soprano, the exquisite way she can float a vocal line and particularly the coquettish charm of her Manon." (International Record Review)

"With this gorgeous Lied and aria recital Ailyn Pérez confirms her outstanding artistic qualities. Her beautiful and generous voice, her commanding technique as well as a the broadest possible spectrum of feelings allow her to make a captivating drama of every piece." (Pizzicato)

"... this enchanting release ... [a] florilegium of delights, however. It is an adorable, joyful recital that’s been treated to an exemplary recording by Jonathan Allen and Simon Weir, and the listener is left enraptured by one of the foremost emerging talents of our time." (Classical Source)